The Truth About Walls (Fencing) 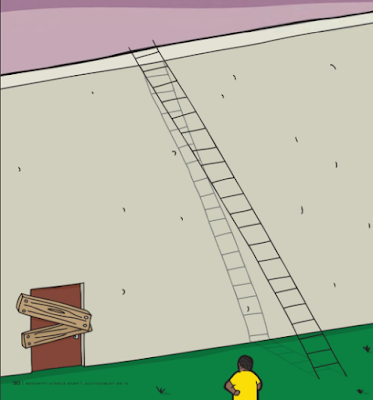 A few years ago, I was asked by the editors of Security Middle East magazine[1] to write an article about perimeter security.  During the conversations with the editor that lead to the eventual article, she asked me to summarize what the article would be about.  I told her that in order to understand perimeter security you first needed to accept the fact that if you have a ten-foot fence the bad guy will bring an eleven-foot ladder.


The idea that you can build a fence or wall and keep the bad guys out faded out sometime after the medieval ages when new technologies and new ways of conducting warfare came about.  Well, the same holds true today.


If you look up fence purposes, you’ll get the following explanation; “A fence is a structure that encloses an area, typically outdoors, and is usually constructed from posts that are connected by boards, wire, rails or netting.  Alternatives to fencing include a ditch (sometimes filled with water, forming a moat)”.


Whether using a wall or fence, the purpose is to delineate a boundary; usually at a property boundary.  This is the true meaning of fencing or "walling", if you will.  To delineate property boundaries, in other words, you’re over there and I don’t care what you do but it you come over here you need to go down to the access point so I can check you out.  With that in mind, you could paint a line on the ground and put up a sign that says, “stay out or go over there for access”.  Both would achieve the same effect as a wall of fence.  So, why not just paint a line.  Because the value in constructing a fence or wall, is 1) to identify the boundaries of the controlled space, 2) to cause a delay in unauthorized access, and 3) to identify unwanted behavior.  An authorized person will not climb over a fence or wall, tunnel under it or cut through it.  An unauthorized person will, especially if they have nefarious intentions.  So, with that in mind, the fence serves an early warning system.  It tells us when someone breaches it that they have  “bad intentions”.  If they didn’t, they would not breach the fence/wall and would proceed to an access control point to display the proper credentials to gain entry.  Hopefully, the fence will be constructed in such a way as to delay their unauthorized access.  Sadly, even without tools a eight foot chain link fence with three strand barbed wire outrigger can be scaled or climbed over in about four seconds.  With tools, like a ladder or a truck to stand on it takes even less time.


Which brings us to the next truth, unless there is a guard or technology monitoring the fence-line in real time, we have no way of knowing if the boundary has been breached.  We must monitor for unauthorized access, respond to it, and engage the aggressor in real time.  The operative word here is “real time”.  If we don’t what’s the use?


Another thing to remember, no matter how solid, sturdy, high or how many bells and whistles are added, there will always be a way to circumvent whatever is put in place.  The key is, making sure there is enough time to delay the “bad guy or gal” so that his or her behavior can be identified and the “good guys/gals” have time to respond and engage.