YEP – IN SECURITY WE STILL NEED TO OCCUPY THE GROUND, WE CAN’T LEAVE IT ALL UP TO ELECTRONIC TECHNOLOGIES 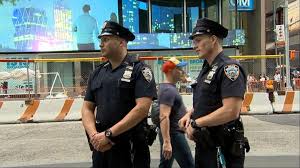 Despite the advances in electronic security technologies one fact remains, we (“the good guys”)still need to occupy the ground.


As many of you know, I’m a former Air Force Security Policeman – a blue grunt, if you will.  So consequently am a little partial to “zoomies” when it comes to the defense of the country.  Our strike capabilities are so sophisticated that we really don’t need the other services (now, don’t get your knickers in a twist and let me explain).  We could just bomb the hell out of the bad guys until they surrender.  But bombing the hell out of them doesn’t do anything for us, because in the end we still have to occupy the ground.  And that’s why the Air Force is just not enough.


The same holds true in the security business.  Everyone is moving towards electronic technologies and the advances in predictive behavioral analyses and other artificial intelligence (AI) technologies is “mind blowing”.
In the ‘80’s we posted guards, in the ‘90’s we put cameras because guards became expensive and since that time we’ve been using analytics to understand better what we are observing.  With the technologies that are currently “off the shelf” we can do allot more than we used to be able to do.  We can have one guard monitor several cameras and with analytics s/he uses can monitor even more as the software interprets what it’s seeing and notifies those responsible when something is amiss.


This is all well and good, but electronics can’t do it alone.  We still need to “occupy ground”.  By that I mean we need to design the built environment so that it complements the technology we use.   The use of non-electronic technologies will become even more important in the future, and especially in the urban environment.


The city of New York employs thousands of cameras around the city but they also deploy thousands of beat officers.  Both rely on each other to enhance the other‘s effectiveness.  If a patrolman sees something, she/he can have a colleague at the central station bring the field of view into focus and zoom in.  And by looking at adjourning screens or from different angles maybe get a clearer picture of what is happening.  Likewise, if the monitor sees something suspicious, he/she can dispatch a patrol to investigate further and cover those areas that the camera can’t see.


So with the utmost respect, we still need the grunts.
Posted by Doug Haines at 4:00 PM No comments: