The Talk and the Red Shirt 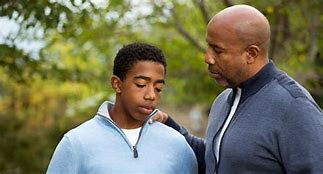 I asked my friend, what his thoughts were about that.  Basically they were the same as mine – senseless, shameful and disgusting.  Our thoughts were the same – no disagreement.  Then he asked me, how old I was when I got “the Talk”.  Thinking he was talking about the “birds and the bees”, I said, “I dunno know, probably 12 or so”.  After all, I believed in Santa until junior high.  What can I say, I’m a little slow.

Anyway, he started to laugh, “No, when did your Dad tell you how to act when you deal with the police.”

“Well, when did you have the talk with your son “?

My Dad was in the military, so we moved around allot but every summer he’d send us back to rural Indiana to stay with my Grandparents who lived on a dirt road.  I kind of feel like that’s home to me.  So I feel like I’m a small town boy.  My friend came from one of those small dirt road towns too; his was just outside of New Orleans.  But our similarities didn’t end there.  We both “grew up” in the ‘50s and 60s, He picked bales of cotton.  I drove a tractor while stacking bales of hay. How we were treated by the police was because of the color of our skin. He black me white.  That’s where the similarities ended.

“You mean, no one told you that when you deal with the police, if you don’t act right you could get arrested or shot or worse”.

“No, why would my Dad have to tell me that?  If I get confronted by the police, I would just explain and unless, I’ve actually committed a crime, they’d let me go”.

“Well, it doesn’t work like that for Black people.  Even if you didn’t do anything, there’s an assumption that you did, and if you didn’t this time, at some time in your past you probably did but just didn’t get caught, so now you’re under arrest”.

And that was about the end of the conversation – our wives showed up and we went to lunch.

It wasn’t until, last week that I fully understood what my friend had meant.

After seeing what happened in Minneapolis, I understood that conversation.  In fact, I was part of what he was talking about.

Back in the mid-80s, while in the Air Force in Germany, I was a cop and took a report from a lady who had been assaulted by a guy at the NCO Club.  She described him as wearing a red shirt.  So I went to the Club and grabbed a guy wearing a red shirt, placed him in handcuffs and took him to the station.  As soon as we entered the building she said, “That’s not him.  The guy who assaulted me was white”.  She then held out a gold chain and said, “I took this from him as I was fighting to get away”.  I un-cuffed the guy, quickly apologized, and took him back to the Club.  I started asking around if anyone had lost a gold chain and the right guy with the red shirt and a significant scratch on his neck showed up.

I had never even considered asking about her attacker’s race, I had assumed.  I can with certainty say this, had the Black guy resisted, I would have used force to subdue him and I would have ruined his military career or possibly worse.   I’ll admit they were different times back then, but it was wrong then and it’s wrong now.

Thank goodness for both of us, he apparently, he had had The Talk.