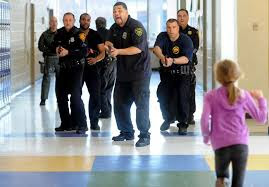 In the days following the Parkland High School shooting, my emotions were out of control; first, because of the lack of “adult” leadership by the Federal government officials and secondly, because when called out by the high school’s young adults they (politicians) attacked the teens.  Whenever asked about how they intended to keep another active shooter event from happening they hid behind thinly veiled comments about how it was someone else’s responsibility to address the causes and fix them.


Let’s be realistic, it’s about guns, it’s about mental help, it’s about a person’s desire for fame, it’s about lack of protection, it’s about lack of designed evacuation routes and the list goes on…  Some causes can be fixed in the short term and others, like mental health issues will take many years to devise systems that are effective in identifying “at risk behaviors” and getting the person the proper treatment.  We also need to address the way schools are designed not only should they be great environments for learning by they must also be safe.  One example is there should always be two ways to egress a space in an emergency.  Currently, many times there is only one and if there are two, they lead into the same hallway.


So, in the meantime, if students and faculty are going to be taught to “hide” in the back of the classroom then the space must provide ballistic protection.  If it doesn’t, the AR-15 bullet will travel through the hallway locker, drywall or classroom furniture.  I thought, if we don’t have specific ballistic protection in place couldn’t we design a system similar to have hotels create additional space by mobile walls.  I reached out to my friends at Amulet Ballistic Technologies and come up with a design for retrofitting existing classrooms or new construction.


In 2018, the Federal government allocated $100 million for security upgrades to schools.  The deadline for application to receive some of that money was 31 July 2018.  If your school district didn’t apply, it for sure won’t get any of the money, so you’ll have to wait until next year.  Fortunately, many State legislatures have been setting aside funding and the process seems to be continuous.


Another unfortunately circumstance when it comes to funding is that most of the money will go to hiring school resource officers (RSO) from the local sheriff or police department.  Placing an armed guard is not in of itself sufficient.  While it will help deter possibly, the truth is if a RSO is present he/she will become the first victim and/or will not be where the shooting starts when it starts.  Another key security feature will be electronic surveillance and access control.  Both are useful and effective but have their limits as well.  Cameras must be monitored in “real-time” AND a response must be immediate.  Access control is only effective if it doesn’t become a burden to day-to-day operations.  If it becomes “taxing” people will figure out how to get around it.


Now, back to $100 million per year for the next 10 years ($1Billion total).  There are an estimated 50.2 – 58 million students in America’s schools.  The average class size in the US is somewhere between 17 and 26, so let’s just say 20-22 students.  If we divide the average size class occupancy into the lower number of total students that tells us we have about 2.5 million classrooms (give or take).  Now, if the average cost of constructing or retrofitting one classroom with ballistic protection is $15,000 (I suspect that once we get going the costs will be lower and more likely to be about $10-12k for a classroom of 20 using the Department of Homeland Security recommended square footage for safe-haven/shelter space occupancy.) then it will take $3,750,000,000,000 to retrofit all existing classrooms.  At one billion every ten years that will be 375[1] years to protect every classroom in the US.


Let me put that into context.  Most people think that during the 2008 financial crisis[2], the treasury department used $700M to save the banks.  This is not true.  The Special Inspector General for the Troubled Asset Relief Program (TARP) in their summary report says that the total commitment of the government is $16.8 trillion with about $4.6 trillion already paid out.


According to a team at Bloomberg News, at one point last year the U.S. had lent, spent or guaranteed as much as $12.8 trillion to rescue the economy.[3]


In either case, more than enough to protect America’s kids in less than 10 years instead of over 300.