Sex Trafficking and the Role of Facilitator 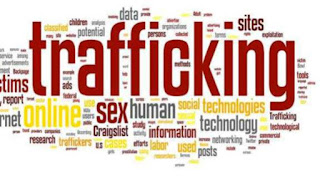 What is human trafficking?


Under U.S. law, human trafficking includes the unlawful practice of selling, soliciting, or advertising the sexual services of minors or of adults who have been coerced into commercial sex.  The term “coerced” can be through physical or psychological means. It is generally agreed that human trafficking generates billions of dollars globally each year in illegal proceeds. In the United States, over eight in ten suspected incidents of human trafficking involve sex trafficking.


Online ads and constant transport of victims: high profits and low risk of detection.  What drives the proliferation of sex trafficking, often referred to as a form of modern day slavery?  According to the National Center for Missing and Exploited Children (NCMEC), the last five years have seen an 846% increase in reports of suspected child sex trafficking, “directly correlated to the increased use of the Internet to sell children for sex.”3 Online advertising has transformed the commercial sex trade and in the process has contributed to the explosion of domestic sex trafficking.  Sex traffickers can pocket profits of between $5,000 and $32,833 per week according to an Urban Institute report.


Sex trafficking is like any other business and includes a seller, customer, and product. The commercial sex trade, however, involves an additional role, which I will refer to as the “facilitator”. In the context of human trafficking, a facilitator is sometimes defined in other ways. For this article, however, “facilitator” will mean persons and/or places that allow sex trafficking to occur, either knowingly or unknowingly, directly or indirectly.  Facilitators can be hotels, online marketplaces, friends or family, shopping malls, strip clubs, truck stops, airports, or the workplace. Sometimes a facilitator is completely unaware of illicit activity and other times complicit. Common facilitators include: online classifieds and adult services web sites, hotels, and shopping malls where illicit massage businesses operate (sometimes a front for sex trafficking).


The market leader in online adult services classifieds is Backpage.com. According to Advanced Interactive Media Group, Backpage.com net more than 80% of all revenue from online commercial sex advertising in the United States. You might be wondering why authorities cannot merely shut down web sites that are suspected of advertising sex trafficking victims. (Age is asked but not verified.) It’s complicated. Recurring arguments revolve around the First Amendment Freedom of Speech and the anonymity of the Internet. To further complicate the matter, many adult services sites are hosted offshore, which is especially problematic for the U.S.


Cynthia Cordes, a former Assistant U.S. Attorney who prosecuted human trafficking cases, discusses the private sector risks of inadvertently supporting the actions of traffickers. “As a federal prosecutor, I saw traffickers target businesses as unknowing participants in the crimes [of human trafficking]; these businesses often had an array of legal ramifications [as a result of] our prosecutions. This was especially true of businesses within the hospitality, food, agricultural and manufacturing industries.”


California’s Red Light Abatement Act allows a building or place to be fined and shut down if found to facilitate prostitution or human trafficking (Penal Code § 11225 – 11235). In 2012 under the Act, two motels in Oakland, CA were sued by the city and ordered shut down for a year following decades of prostitution and child sex trafficking.9  The Trafficking Victims Protection Act (TVPA) provides ways to prosecute entities and individuals, whether they played a direct role or not. Although most victims do not pursue civil litigation once they are free of their traffickers, sex trafficking presents an ongoing business risk. Businesses could see more instances of civil litigation in the future.


If you or someone you know is in immediate danger, please call 911.


If you believe you have information about a potential trafficking situation, call the National Human Trafficking Resource Center toll-free hotline at 1-888-373-7888. Call Specialists are available 24/7 to take reports of potential human trafficking. All reports are confidential and you may remain anonymous. Interpreters are available. To submit a tip online, go to https://traffickingresourcecenter.org/report-trafficking


By Linda Lange, Director, Cyber Safety Talk– specializing in consulting, open source research, & training.  Linda is involved as a human trafficking community advocate on her local D.A.’s Human Trafficking Task Force. She was invited to testify before the Human Exploitation & Trafficking Institute (H.E.A.T.) in February 2016, where she presented “Online Sex Trafficking in Our Communities.” She holds an M.S. in Organization Development and was awarded a scholarship in 2013 to study Cyber Security Law & Policy through Syracuse University College of Law, Institute for National Security & Counterterrorism. She holds certificates in Internet Crime & Identity Theft, Information Systems Security, and Human Trafficking. Contact: linda@cybersafetytalk.com


4 Urban Institute, Estimating the Size and Structure of the Underground Commercial Sex Economy in Eight Major US


7 Stephen Koff, “As Rob Portman and Senate prepare to bring contempt-of-Congress charge, Backpage.com says ‘Bring it on’” available at http://www.cleveland.com/open/index.ssf/2016/03/as_rob_portman_and_senate_prep.html